What is Frozen Shoulder?

Frozen shoulder is a relatively common condition involving the shoulder joint, which causes pain and loss of motion in that joint, often for a substantial period of time. The shoulder joint, between the ball (humerus) and socket (glenoid), like all joints is surrounded by a capsule which is a thin but strong sack of tissue which holds the joint fluid within the joint. An additional function of the capsule is to stabilize the joint so that it does not dislocate and to restrict the amount of motion of the joint. If the capsule is lax there is a large range of motion available, but the joint in turn may dislocate. On the other hand, if the capsule is tight the range of motion will be restricted, but the joint is very much held together and cannot dislocate.

The exact underlying cause of frozen shoulder is unknown but essentially the capsule of the shoulder joint becomes thickened and inflamed. Sometimes this is thought to be as a result of trauma or surgery but more commonly it comes on without injury. It is commonly isolated to a single joint, but it can occur in the opposite shoulder. Frozen shoulder does appear to me more common in women between the ages of 40-60. As well as, it is more common in those patients with diabetes and hypothyroidism, than in the general population.

Initially when the inflammation begins the shoulder becomes sore. This may be noticed as a gradual onset of soreness but often it is noticed as a distinct pain when the shoulder is stretched or pushed, such as during a game of tennis or when reaching out suddenly. After that the pain becomes gradually worse. It is relatively constant in nature, worse at night and the shoulder is often very difficult to lie on. With time the condition passes through 4 stages.

Stage 1 (0-3 Months)
Initially there is pain present but the range of motion is relatively normal. This is the stage of early inflammation.

Stage 2 (3-9 Months)
Following the initial stage, the capsule, which is becoming increasingly inflamed, starts to become swollen and thickened, and as a result it begins to tighten up. As it tightens up, the range of motion in the shoulder becomes gradually restricted and often within 1-2 months of the commencement of the disorder this restriction of motion has become apparent. Patients often first notice a decreased ability to put their arm behind their backs, for example to do up a bra.

Once established, the pain can become quite intense and very constant. As the capsule becomes tighter the motion and function of the entire shoulder girdle becomes affected.

Stage 3 (4-12 Months)
If the inflammatory condition within the shoulder joint is left alone it will continue unabated, often for some months, until gradually the inflammatory cycle settles down and the pain starts to go. By that time, however, the swelling in the capsule around the joint has turned into scarring, and thus, despite the fact that the pain gradually eases off the restriction in motion may remain for longer duration.

Stage 4 (12-24 months)
With the passage of time this scarring gradually stretches out. The majority of patients return to full function. The time course for this condition to go through all four stages is somewhere between six months and three years depending on the severity. Overall however, the natural history of this problem is towards resolution and the majority of people do regain most motion of their shoulder.

There are very few things that can be done for frozen shoulder. It is an inflammatory condition. The joint itself is inflamed and sore and therefore, anything that interferes with that by stretching or pulling on the capsule can make it sore. As such during the inflammatory phases, aggressive physiotherapy does not help and indeed may make things worse.

It is recommended to continue to try to stretch the shoulder, but in a non-aggravating way. This includes maintaining the motion that is already present and trying to push a small amount further. If this causes increased pain later than too much has been done and the stretching should be decreased. Anti-inflammatory medications such as Celebrex, Naproxen, or Advil can be taken regularly to limit the discomfort and decrease the inflammation.

One treatment that offers some help in this condition is injection of cortisone into the shoulder joint itself. The aim is to break the cycle of inflammation and expedite the resolution of inflammation and stiffness. During the injection, a high volume of fluid can be added to help break up some of the scar tissue (hydrodilation). This may expedite the thawing process further. This can be done in the hospital by a radiologist or in our office using ultrasound guidance. 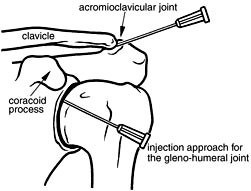 Once the inflammatory cycle has resolved, a gradual stretching program can be embarked on and at this stage physiotherapy can be very helpful. A home program of gentle self-stretches can be useful.

If at the end of this process there is still a restriction of motion, then the remaining capsule has to be either stretched or released. Where the capsule is very tight, some form of rupture or release may be required. This can be achieved either by manipulation under anaesthesia and/or by arthroscopic release of the capsule. There are risks with these procedures thus they are generally performed if non-operative management fails. It is rare they are required and usually not done before 18 to 24 months of stiffness.